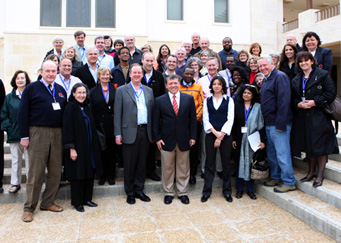 The Intimacy of The Desert

It was an unlikely setting for a business meeting: the spectacular desert landscape of Jordan’s Wadi Rum. Flickering flames illuminated the faces of school leaders from around the globe. Above, a chilly night sky filled with the smoke of roasting lamb and the glimmer of previously unseen stars.

Intimacy characterized our gathering at King’s Academy; an intimacy prompted by a program rich in speakers, activities and the sharing of ideas. We were briefed by leading authorities: Jordan’s Minister of Energy and Mineral Resources, Khaled Irani, Jordan’s Prime Minister, Samir Rifai, and – speaking of authority! – His Majesty, King Abdulla II.

There was much to learn and we could not have had finer teachers. Senator Akel Biltaji, whose life work has ranged from Wadi Rum site supervisor for the filming of Lawrence of Arabia to Chairman of the Tourism and Heritage Committee, reminded us that while Toynbee spoke of history as “geography in motion”, for Jordan, it is equally true to say that history is “economics in motion.”

A lack both of water and regional peace poses the greatest threat to Jordan’s future prosperity. We learned that Jordan is the world’s fourth most arid country and that few nations stand to gain more from a negotiated settlement in the Middle East.

Jordan’s King and Prime Minister both spoke of the need for Mega-Projects, with their attendant “KPI”s, now known to all Jordanian politicians as Key Performance Indicators. These projects include: the “Red-Dead Canal” to bring water from the Red Sea to the rapidlyÃ¢â‚¬Âdying Dead Sea, railroads to link with neighboring countries, uranium mining – “finally we have something the world wants!” – and seawater desalination in Aqaba. (Several of us took the chance, hopefully not our last, to float in the Dead Sea’s dwindling waters, which are currently dropping at the rate of three feet a year.)

“We’re at an all-time low,” said King Abdulla II, referring to the ongoing Israeli/Palestinian conflict. Nevertheless, His Majesty hopes to bypass politicians and appeal directly to the Israeli public, and to bring President Obama’s attention back to America’s core challenge of securing peace in the Middle East.

Beyond the region’s turmoil and the determination of its dynamic leaders, we were introduced to a full range of Jordan’s most esteemed experts, enthusiasts and activists.

From the world beyond Jordan, we were inspired by the presentation of Barbara Goodwin-Zeibots and Barbara Galbraith, whose holistic Global Pathways project has given such hope to the people of Chettipalayam, India. We were provoked –some more than others! – by the words of Barnard College President Debra Spar, who proposed tough measures to tackle higher education’s addiction to funding annual costs out of endowment funds, now painfully diminished; a challenge many of us would love to have.

For all of us, it was a relief to have others in charge, to be the ones cared for, to be students again.

For the magnificent experiences and learning that were part of this Global Connections XII, we wish to thank the following:

And so until we gather again in 2011, perhaps around a warming fire in the African bush, we return to our schools filled with an appreciation both of Jordan’s beauty and its many challenges, renewed in mind and spirit and grateful for the affirming and intimate presence of our fellow educators.