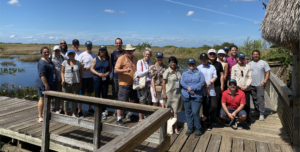 To know a country takes all we know of love:

some days better than others, but never easy

to keep our promise every morning of every

year, of every century, and wake up, stumble

downstairs with all our raging hope, sit down

still tired, and say: Listen, we need to talk.

— from What I Know of Country, by poet Richard Blanco, our closing GC dinner speaker, who was selected by President Obama as the USA’s fifth Presidential Inaugural Poet.

One of the hallmarks of any Global Connections Seminar is the need of delegates to talk, to share ideas about best practice and to encounter, together in the company of experts, some of the world’s most compelling challenges. In keeping with that tradition, educators from all across the globe gathered in Miami for the 21st Global Connections Seminar on the topic of Human Migration and Water.

But our conference themes were not the only topics of conversation.  The timing of our visit, coinciding with the fast-growing threat of COVID-19, emphasized the need to talk with each other about painful, but prudent steps to postpone or cancel international programs, programs that underpin our very purpose.  “Shelter in place”, however vital at present, runs completely counter to the future that Global Connections envisions!

In this unsettled time, we were particularly grateful to our hosts: the Palmer Trinity School (PTS) community who provided warm hospitality and abundant opportunities to interact with students, scientists, historians, artists and fellow educators.

Our week began with a PTS International Festival, attended by hundreds of PTS families and visitors, complete with mariachi music, delicious international food and a warm welcome by PTS Head of School, Patrick Roberts.

We were given an excellent historical overview by John Bachay, historian at the Miami History Museum who reminded us of Miami’s demography: 60-70% Hispanic (bolstered by significant Cuban migration), 15% African-American and 15% White.  This in a unique, bilingual city, seen as a more tolerant, nearly Latin American city, a harbinger of the changing demographics of the USA as a whole.

Later in the week, Mr. Bachay gave us a fascinating tour of Miami’s South Beach with its well-preserved Art Deco architecture followed by a culinary tour of Miami’s Little Havana.

Dr. Gamarra noted that, in today’s political climate, few countries welcome immigrants. Indeed, in the era of COVID-19, human migration has never been more proscribed.  In Dr. Gamarra’s view, walls are not the answer.  Whether on the American border with Mexico or in the shared island of Hispaniola between Haiti and the Dominican Republic, existing or proposed walls will prove useless when it comes to keeping human migration at bay. Perhaps the poet Robert Frost had it right when he wrote “Something there is that doesn’t love a wall, that wants it down….”

In a compelling talk by the former President of Costa Rica, Luis Solis on Climate Change and Human Migration, he asked: “Is sustainability sustainable?” and “Are we pursuing conservation with or without people?  Solis made it clear that human poverty is the largest predator of nature and that we must create conservation efforts that do not criminalize or make enemies of the poor.

On issues of Water and Sustainability, delegates were addressed by Caiti Waks, PTS ’07, of Debris Free Oceans, Delany Reynolds PTS ’17 of Sink or Swim and Adam Roberti of Cortada Projects at the University of Miami. Two key questions emerged: What are the most effective ways to engage and educate our students on issues of sustainability?  What is the role of art in helping the public to understand scientific research?

Tours and presentations at the beautiful Vizcaya Musuem and Gardens and the Deering Estate emphasized the vital role of experiential education in guiding students to engage with our environmental and cultural heritage.  Additionally, we were treated to an exceptional tour of the Perez Art Museum Miami where one delegate, head of a school in Botswana, was delighted and surprised to encounter an exhibit featuring work by a former student.

In addition to tours and well-researched talks by students at PTS, delegates had the opportunity to engage with leaders of two outstanding Miami schools: the Coral Reef Senior High School, a public school, and Columbus High School, a boys’ Catholic High School.  Delegates were struck by the impressive, professionally-equipped TV news program at Columbus which is arguably the best student broadcast company in the country.

A visit to the University of Miami’s Marine Science laboratories gave delegates an appreciation of the science behind efforts to restore coral reefs and to preserve marine creatures and their habitats.  This was followed by an exhilarating airboat tour of the Everglades which capped off a splendid week of exploration, inspiration and conversation.

A special vote of thanks goes to the Palmer Trinity team including Head of School, Patrick Roberts, Ashley Chapman, Danny Reynolds and Manjula Salomon. Finally, we are deeply grateful for the daily efforts – and abundant patience– of Suzanne Calleja who made sure that this exceptional experience went off without a hitch.

Miami is one of the last tropical oases known for its beautiful cityscapes, sparkling water, and eclectic culture.  The theme of our seminar was Human Migration and Water. We have chosen these as the most important global issues of the day.  We were excited to show you all that Miami, the Caribbean, the Atlantic, and the Everglades has to offer.  We also had several powerful speakers, such as former President of the Republic of Costa Rica, Luis Solis, and Dr. Eduardo A. Gamarra, Professor from the School of Public and International Affairs at Florida International University.

We stayed at a hotel in Coconut Grove, walking distance to the Bay and historical sites located in a vibrant community.  The week was filled with education, cultural experiences, and opportunities to engage in Miami hospitality.  Miami is unlike any other city in the United States–a bilingual city that is unique.

The Palmer Trinity team, all who have attended a Global Connections Seminar, look forward with great anticipation to welcoming you to our School and to Miami, the Magic City:  Head of School, Patrick Roberts, Ashley Chapman, Suzanne Calleja, and Manjula Salomon.   In addition, our Round Square representative, Danny Reynolds, looks forward to greeting you. 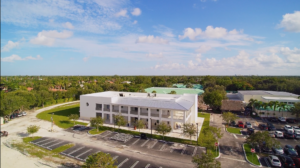 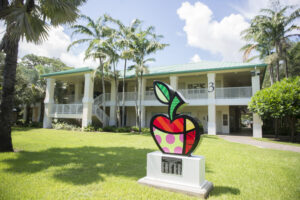 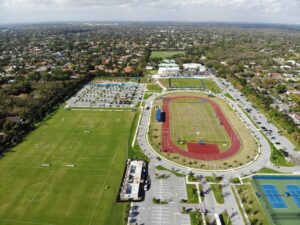